Ok, I know, this is a pretty juvenile post. But I know most of us guys(at least the ones who are willing to admit it) remember bragging about one day marrying a model. Well as of last weekend it became a literal truth. My wife was walking in a local mall when after leaving a clothing store she was approached in the corridor by the manager. At first she wondered if she accidentally took some clothing without paying. It turns out the manager had an unusual request. They were having a fashion show that weekend and the woman wondered if my wife would be willing to partake in it as one of their clothing models. At first she felt a little shy, but being the trooper that she is she decided to give it a try. She did a fabulous job! Unfortunately I dont have pictures of the actual event, but I do have some taken from a professional photographer last May in the Dominican Republic.
So without further ado here's my Model Wifeee. 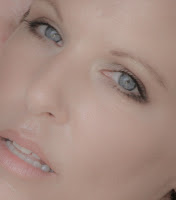 She has lovely eyes.

I'd keep my eye on that guy in that one photo. He's getting kind of close there ;-)

She's stunning and who's that male model in the picture with her... :) Looks like an older Mike Delfino from Desperate Housewives.

Funny thing is, Im not Christian. Though I do have a "Hot" wife. ;)

thanks for correcting me.

so atheists all have ugly wives? i don't get it ;-)

according to that link i gave, christians like SAYING that their wife if hot.

It's just a parody for a laugh, though.

Thanks for the compliment JC.

She's a very pretty lady and the pics are really cool...congrats dude!

Also, I don't have your e-mail - I want to comment on Doug's blog (if possible).

Great post! I've seen some of those pictures previously on your wife's blog too. They are very nice. And hey, it's OK to brag, that's for sure. Like you said, when we were young, you want the model. And when you have one, you should brag about it. LOL.

Beautiful! You're a lucky man, though I'm sure you know that. ;)